Inside the Site"blow molding" Our last page; Total 10 found 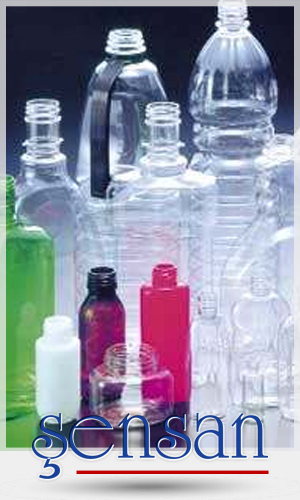 
Plastic products, the first fusion of high-density polyethylene (HDPE) blow molding mold is produced with raw materials and pet preforms. Features to comply fully with the rules and food hygiene regulations. All production steps are carried out in our factory. Thus, with the understanding of a service to our customers, delivering faster and more economical. Moreover, studies by our company and customer specific products and mold design, production is carried out.

We produce PET Preforms and jars, all suitable European standards, and direct contact with product.
Quality, is the end product of all the activities of a company. A company's only goal is to keep customers continuously satisfied, and always able to fulfill future requests. Our principle objective is to catch the best quality and the best quality of production to capture every moment in all of our products are filtered and a meticulous, even a small mistake by breaking into the fire to be brought back into raw materials. Plastic PET production certificates as ISO 9001 quality control system Sensan developing day by day and at the end of the shift, not the quality control of each product is produced. How many reports that they fire their employees at the end of day, and tells the machine what had caused the problems, such as measures are taken accordingly.


PET Preform, PET jar or bottle in a previous state of swelling. First of all raw materials, special PET PET granules are dried to a humidity of 0001% after drying machines, injection molding machine, PET center is transferred to the silos, where heated to 285 ° C. After thawing, the latest technology with a fully computer controlled injection molding machines is injected into the active water-cooled injection molds. Precision molds 5 microns. Here to cool completely hands-free robot technology and preforms are removed from the mold. Us make the most efficient injection molding machines settings for the latest technology, we do in the shortest possible cycle time and the polymer molecules, the smallest level of pressure loss and acetaldehyde production by keeping to a minimum keeps IV. Preforms produced fully automatic blow molding machines, lined up a special in-house transport treylerlarına taken or sold to the customer is placed in a special octabin'lere.


Ovug around the mold, extrusion blow molding part of the environment in the process I close the parison mold and separates the excess material blocking an upturned ends.


A blow molding process in the injection mold in which the parison to be inflated. 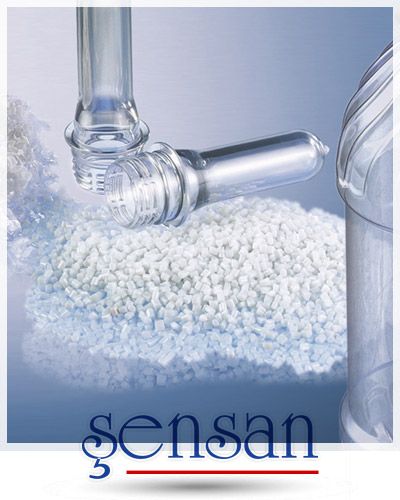 Polyethylene is one of thermoplastic polymer and the oldest family initially showed only low-density development and generating high-density, linear medium density polyethylene to three new species were added to the family.

Polyethylene is widely used today rather. Addition of new species, namely improvement of polyethylene from toys, household goods up to the many bags of cans are used in the field.

Durability of polyethylene, strong variation, with the advantage of easy workability and dielectric properties are used as very common nowadays.

Polymerisation reaction of ethylene, chemical products company in 1930, Imperial Chemical Industries 7ngiliz chance at found. But in the beginning, about 2000 occur under barlık very high pressures of these reactions can be easily applied technology to make the required years. Before long, mechanical and electrical properties to become aware of the polyethylene, began to be used for many different applications. Then, 1950 in li chemist K. Ziegler, under low pressure has developed a polymer reaction update. This method 1970's life in all types of expanded polyethylene, so that date from polyethylene, the world-wide has become the most widely used plastics. Garbage bags, dating back to the electrical insulation was used in a wide variety of areas.

Polyethylene is a polymer of participation. Ethylene, polymer and becomes a catalyst and polyethylene polimerlesmeyi initiator occurs. NCH

• Lightness and Ease of Use

Materials and furnishings during syllogism ease of mobility, an important advantage compared to alternative materials.

• joints under pressure and breaking out of the lack of

Excellent source of properties joints out / are preventing rupture or leak.

• Crazing Resistance of Kars to

• Chemical Resistance Impact of the Kars

PE materials with different chemical resistance against the "Project and Technical-Chemicals" section are given.

5. Make the INGREDIENTS FOR GOOD SOLID POLYETHYLENE of

GOOD properties of polyethylene make some effects and resistance to increase resistance against being melted down under pressure by the method of mixing chemicals into polyethylene is added.

This type of chemical structure is generally fent as primary and secondary antioxidant is divided into two groups. In other words, radical extinguishers Primary oksidantlar polyethylene macromolecules during the heating and the resulting fragmentation of the radicals are neutralized, prevents proliferation. Secondary antioxidants in an oxygenated environment degradation of the polyethylene formed with parts and hidrosiperoksitleri More prevents decay. These two long-term degradation of polyethylene oksidantlar ensures against resistant.

Solar ultraviolet light cut all kinds of carbon - carbon bond, and this will impact causes bond breaking weaken over time. This is to move to the front of the sun into the effect of polyethylene polyethylene chemical substances that are placed before absorption. These chemicals, UV absorber and UV to quencher is collected in two groups.

6. TECHNIQUES OF OPERATION OF POLYETHYLENE

Polyethylene plastic processing industry, the materials are the most common processing area.

• Wire and cable is manufactured

In an autoclave or tubular LDPE tubular reactor, ethylene monomerlerinin 1200 to 3000 atm pressure and 130 to 350 ° C temperature, the organic peroxide is obtained with the help of polimerizasyonundan. O as catalyst in high pressure process

High-pressure process for producing LDPE and peroxide and oxygen is used kabbalists. Figure 1 'LDPE' s production process can be seen. Polyethylene required to produce pure ethylene, pumps 150 MPa with the help of a pressing 190 º C in the tubular reactor is fed. At the same time the reactor is done to add to the catalyst. A reaction occurs in solution. Here comes the mixture separatörüne high pressure. Here, as low pressure polyethylene ethylene reactions have suffered is being separatörüne way, do not react to be fed back into the system before ethylene compressor, then is sent to the tubular reactor. separatöründen low pressure resulting product is fed ekstrudera. The products Ekstruderda mold, is cooled after kurutular ago.

4 'lerde synthetic rubber plant and also to foreign markets for the Tupras Yarımca verilmektedir.2 = CH2 (CH2 - CH2) n (Catalysts O2, temperature, pressure) of carbon in the polyethylene chain trans tab düzenlenmiştir. Polyethylene, a solvent-soluble and is cooled and crystallized single - crystals are obtained. Polymer chain determines the degree of branch if no crystal. Molecules in the crystal structure at Dal usually is more than you. Increases in polymer crystallinity increases hardness, mechanical and chemical properties will recover and increase resistance to liquid and gas. Melting index is inversely proportional to molecular weight. HDPE 'hardness and durability of the more leptin, melting flow index, or more düşüktür.2 peroxide kullanılır.3
Elasticity module from 0.1 to 0.26

• All kinds of stress and shrink film

• Bags, napkin in the field for the plastic bag is used.

Extrusion coating and film applications with LDPE LLDPE 's better is being used by mixing LDPE processability obtained due' eat a little reduction in the demand is observed.

Extrusion coating, blow molding and coating, wire and cable coatings used in the traditional market, such as LDPE, LLDPE with high process capability and clarity of resistance to this market has more to enter. Final product distribution of consumption in Figure 3 'is mis te data.

LDPE basis for field use, application and film forming packaging sector% of consumption is a 74'lük. Polyethylene film industry will continue to grow and the demand for LLDPE 's use of LDPE is mixed with will support this growth.

High-density polyethylene to break, to break and parts of them as being lost resistance against high temperature and pressure to mold is needed.

HDPE, titanium tetrachloride catalysts (Ziegler - Nata catalyst) and organometallic catalyst with the help of 10 to 20 atm pressure and 70 - 80 ° C temperature to obtain the results of ethylene polymerization. HDPE, low pressure in the working processes are manufactured. HDPE, has a branched structure.

Low-pressure process to produce HDPE and ethylene as feed supply must be made with komonomer. Figure 2 at low pressure in the HDPE production process can be seen. Union Carbide's Unipol process is used. Pure ethylene with 1 - komonomeri liquid butane is fed to the reactor bed. At the same time the reactor is fed to the catalyst. Reactor at 100 º C at 690 kPa pressure from 2100 kPa 'interests. Not react in the fluid bed reactor with ethylene ago compressor suitable temperature and then pressed and cooled to come back to whether the system is fed. Reacting the resulting gas from the reactor product gas - the lock chamber will be installed on the heels. Here comes the product separator. Separators, products to be stored will be cleaned with nitrogen. The mean duration of stay of polymer in the reactor 3 to 5 are sold.

• Water distribution, sewerage, irrigation pipes in the areas of distribution network is used.

The largest development in the technology of HDPE muti-stage reactors durability and is manufactured using a bimodal HMW HDPE developing at has. This type of film and blow molding applications to receive a share of LDPE and LLDPE market has been highly successful. Figure 4 Distribution of the final product use 'te was given. With a capacity of less than 5 liters bottle manufacturing of blow molding applications, about 40% of HDPE demand 'lık part has. These containers, detergents, liquid soap, shampoo, such as milk bottle has a wide range of use. Some areas the use of recycled polyethylene increased 1 Quality HDPE 'to limit the use of milk and fruit juice although growth will continue to use for the HDPE is estimated.

Recently, using low-pressure autoclave and tubular reactors are produced by LLDPE. LLDPE 's features LDPE from is quite different. Resistance to stress and strain LDPE what higher than, impact resistance is better. Heat resistance 15 ° C higher, processing more difficult. However, clarity, brightness and worse, is lower than the melting power. Production is carried out in the gas phase LLDPE process, the resulting resin, ethylene - is alfaolefin copolymer and has a linear structure. LLDPE at branch processing is not actually a lot of space in the machine direction is up. Shooting in the direction perpendicular to the elongation is low. While LLDPE grass, as hekzen and butene copolymer produced with.

LDPE and LLDPE processing techniques and processing techniques are the same, the press is only shoulder LLDPE LDPE request ekstruderlarında is not conventional. Therefore in LDPE LLDPE 40% are mixed in proportions of disengaging. LLDPE 'ni alone to process these products have been designed according to the need to use the new extruder.

high flexibility, low temperature heat in the resistance against the high-purity

degree of clarity and high optical transmittance and sees a lot of interest.